Longtime readers of this journal will remember the constant follower who called herself jenlev -- a person I always sensed was a good and gentle nature, though of course that's merely an impression.  Jenlev loved birds, especially ravens and crows, and photographed them constantly.  I used one of her pictures as a Facebook icon (and still do).  We corresponded outside social media about birds and other things, 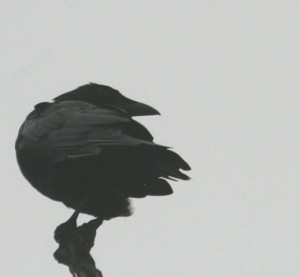 Her emails always ended with this quote:

"If my words did glow
with the gold of sunshine
And my tunes were played
on the harp unstrung
Would you hear my voice
come through the music
Would you hold it near
as it were your own?"

I remember the firs time I listened to Blonde on Blonde.  I'd been impressed by some of his songs, and lots of them I found weirdly artificial -- his pseudo-illiterate grammar no American ever used, his teenage-genius visions.  he was somehing -- no doubt -- but I couldn't predict what.  But hearing Blonde on Blonde I was sure I was listening ot one of the great works of art dcreated in my lifetime.  Then came John Wesley Harding and I was astonished all over again.  I've listened far less to the music he's done since -- though some of what I've heard almost matches those two albums.

ANd the Nobel gives me leave to reveal my long-ago-earned but so-far-secret knowledge of the import of one of his most teasingly obscure but actually quite obvious songs:  All Along the Watchtower.

"There must be some way out of here" said the joker to the thief
"There's too much confusion, I can't get no relief
Businessmen, they drink my wine, plowmen dig my earth
None of them along the line know what any of it is worth."
"No reason to get excited", the thief he kindly spoke
"There are many here among us who feel that life is but a joke
But you and I, we've been through that, and this is not our fate
So let us not talk falsely now - the hour is getting late."
All along the watchtower, princes kept the view
While all the women came and went, and their foot-servants, too.
Outside in the distance a wildcat did growl
Two riders were approaching, the wind began to howl.

The secret of the song is that it is a moebius strip.  The last stanza is actually the beginning:  the ladies on the watchtower observe two riders approaching.  The point of view then shifts to the two riders:  the joker and the thief.  The hour is getting late for their arrival.  But they can never arrive -- because they and their conversation have been put first, and when the last line as sung is reached, and the ladies see them in the distance, they must begin again.  "There must be some way out of this," says the Joker -- but there isn't, despite the Thief's insistence that they've been through that (they have) and they should not talk falsely:  the hour is getting late, but can never pass.  The Joker has it right.

[BTW on a couple sites I read the words "barefoot servants too" which is absurd.]

It's trivial -- so many other and far larger awful things lie around us on every side -- but it seems as though Americans are simply forgetting how to use English words.  I am very well aware that language changes, usage loosens,  shortcuts become formal speech:  but mostly what I experience is a loss both of exactness and richness.  The march of the preposition "of" to take the place of prepositions that are more appropriate and meaningful is one example (my Facebook page has noted many).  Now i see that the new bill passed allowing US citizens to sue the Saudi government for damages related to 9/11 is called "Justice Against Sponsors of Terrorism Act."  Justice against?  I had never seen this formulation and i don't understand how it can mean what it seems to want to mean.  I thought it must be a new [counterfeit] coining, but a quick search in Google Books show it used in many titles in many contexts, all recent.

I am trying fruitlessly to remember the term for the late Greek world of the 2nd to 4th century CE. Not Ptolemaic or Alexandrian or Graeco-Roman.  ANother one.  Help?

Rules as long before:  Add words and punctuation to the phrase at either end such that the the result will be a good English sentence.  No adding things within the phrase.

mythos so mainstream it has passed, whatever

I know it will seem a little much that having long abandoned my page here, I return in order to drum up business for a project I am concerned in.  I hope you'll forgive me because it will be evident (to those who don;t already know it from Facebook) that it IS REALLY COOL and offers real value to supporters and contributors.

Yes I am talking about a KICKSTARTER project to fund beautiful hardcover editions of my new project (ongoing for years, of course, like all of mine) -- "The Chemical Wedding, by Christian Rosenkreutz.  A Romance in Eight Days."  A little book I regard as a good candidate for First Science Fiction Novel (pub. 1616 -- 400 years ago exactly!).

There are only 14 days left in the campaign and a little (well, quite a bit) less that nalf the stated goal amount reached.  I hope you can participate.

ANd here's a prize for everyone -- a riddle I just thought of:  What number, when you add 5 to it, changes space into time?

I thought I'd got away from South Bend long ago, but here I am in Mishawaka (South Bend's Twin CIty, as I 'm sure you know) serving the public thoughtfully and humbly.

Rouze up, O Young Men of the New Age! Set your foreheads against the ignorant hirelings! For we have hirelings in the Camp, the Court, and the University, who would, if they could, for ever depress mental, and prolong corporeal war.

Same goes for you, Young Women!  and you Greybeards too! Set your foreheads against the ignorant hirelings!

Can anyone come up with the names (or a hint to get the names) of stories or movies where somebody tries to become smart by reading the encyclopedia?  (Not counting A.J. Jacobs.)

There is a certain kind of modernist story that involves the sudden appearance of an inexplicable thing in an ordinary social situation -- something ususlly large and unavoidable -- that's not particualrly threatening but is inconvenient and eerie.  Gradually people come to either accept it or explain it to themselves.  Eventually it vanishes, or it never does.  The only example I can think of is Marques's "A Very Old Man with Enormous Wings."  I know there are others.  ANy examples?
Collapse